An Invitation from the Abbot Primate in Rome

''This is, as far as I know, the first time any artist of note has undertaken such a project.
Roseman's work has greatly impressed those of us in the monastic world
who have been fortunate enough to see it. His pictures are technically of the highest quality,
and he has succeeded in a remarkable way in conveying the spiritual dimension of his subjects.''

Roseman and Davis presented the Pope with a gift of the beautiful drawing Brother Florian Playing the Recorder from the Benedictine Abbey of Tyniec, near Krakow. Pope John Paul had been Archbishop of Krakow before his election as Pope.

Heartily shaking Roseman's hand, Pope John Paul II said he was ''deeply moved'' by Roseman's paintings and drawings, a selection of which he previously had seen in photographs prior to his meeting the artist, as well as from the gift of the drawing that Roseman presented to the Pontiff. Pope John Paul, who had a personal interest in the arts from the days of his youth, greatly encouraged Roseman in his work.

Reaffirming what the Abbot Primate had written, Pope John Paul praised Roseman as "a great artist" and expressed his admiration for the scope and spiritual depth of his work on the monastic life. The saintly Pope took hold of Roseman's arm as they spoke and said:

"Stanley, your beautiful paintings and drawings devoted to contemplation and prayer
promote a spirit of friendship and understanding
between Christians and Jews and all people of goodwill."

© Stanley Roseman and Ronald Davis - All Rights Reserved
Visual imagery and website content may not be reproduced in any form whatsoever. 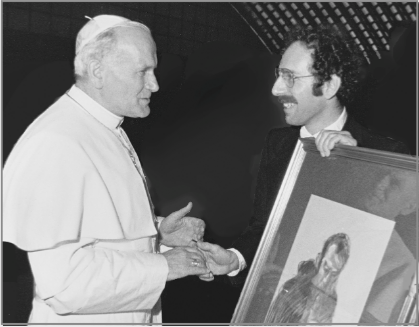 The memorable occasion was preceded by a gracious invitation to Roseman and Davis from the Abbot Primate of the Benedictine Order, Dom Victor Dammertz, to be guests at his residence in Rome.

3. Taking hold of Roseman's arm as they spoke,
Pope John Paul II said that he was "deeply moved"
by the artist's work on the monastic life.
Vatican, March 21, 1979

The Polish Pope was in the first six months of his pontificate in 1979 and had not yet returned to his homeland. Acutely aware of the difficulty for those outside the Eastern Bloc Countries to obtain the necessary entry visas as well as to travel on their own behind the then Iron Curtain, Pope John Paul expressed his appreciation to Roseman and Davis for their having made the journey to Poland. 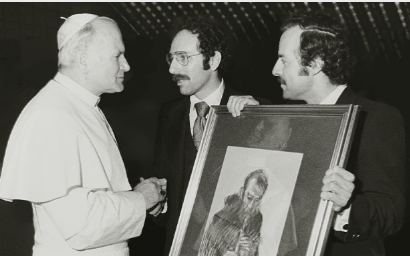 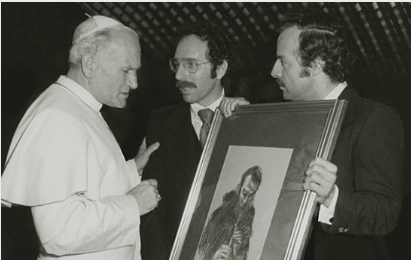 Dom Victor Dammertz, O.S.B, Abbot Primate of the Order of St. Benedictine, invited Roseman and Davis as his guests at the abbot's residence, the Badia Primaziale Sant'Anselmo, in Rome, in late winter of 1979. Roseman made the journey to monasteries across Europe with Davis, who wrote the letters to monasteries to introduce his colleague's work, relate the artist's interest in monastic life as a subject for his paintings and drawings, and make a request for a sojourn. Davis helped plan an itinerary and as he had done for their Lappland journey, took on the responsibilities of organizing the project on the monastic life.

On the feast day of St. Benedict of Nursia (c.480-c.547), whose Rule called The Rule of St. Benedict is the basis of monastic observance in the Western Church, Pope John Paul II warmly received at the Vatican on March 21, 1979, Stanley Roseman, who is of the Jewish faith, and his colleague Ronald Davis, of the Roman Catholic faith.